Why Use MRI in Biomedical Research? 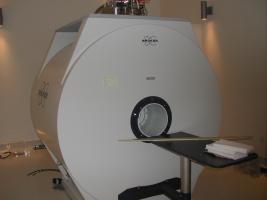 Magnetic Resonance Imaging (MRI) has become a useful diagnostic tool since its introduction into the clinic over 30 years ago. Researchers have equally recognized its value in monitoring a variety of biological systems, from simple protein solutions to animals and humans. Along with its obvious use as a clinical research tool, MRI has gained popularity in studying preclinical animal models of human disease and disorder. MRI is characterized by two advantages that are attractive in preclinical research: the ability to monitor in vivo biological variables noninvasively, and the ability to serially track the progression of a disease or intervention in the same living animal, thus improving a study’s biological and translational relevance. MRI can measure a wide array of biological variables, ranging from morphological information to parameters relating to tissue function. More recently, MRI has made forays into “molecular imaging” where cellular and biochemical events are indirectly detected through the use of targeted contrast agents. The implementation of these increasingly complex MRI techniques is not straightforward, and requires intimate knowledge of the physics and mechanisms behind the measurements.

The following sections provide some examples of previous and ongoing projects at the UBC MRI Research Centre as well as promising new applications that could potentially be implemented at the Centre.

Morphological imaging is important for distinguishing differences in anatomy due to disease progression or phenotype. MRI performs very well in measuring anatomical detail due to excellent image contrast between individual soft tissue types (e.g. water vs. fat, normal vs. cancerous). Acquiring good images at high resolution is challenging with in vivo specimens, with a voxel size of 0.1×0.1×0.5 mm being achievable through careful experimental design and moderately long acquisition times. 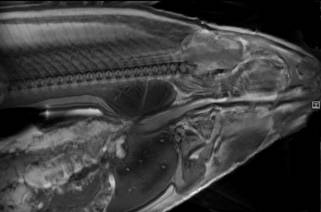 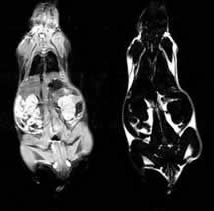 MRI will never be able to match the exquisite resolution available in optical histology methods, but does offer the opportunity to nondestructively acquire volumetric images of a living animal in virtually any orientation. Image quality and resolution further improves with ex vivo specimens, with other investigators reporting isotropic resolutions as small as 50 microns (fixed mouse specimens with overnight scanning times). In addition, MRI can measure the overall effect of structures much smaller than the voxel size; a classic example is “diffusion imaging”, which measures the amplitude of the microscopic diffusion processes which influence the MRI signal. 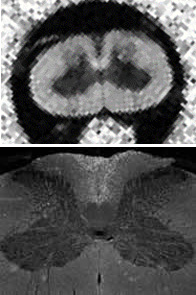 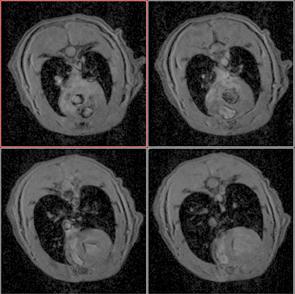 Apart from morphological imaging, current MRI applications have tended towards measuring the function of biological systems, which further clarifies the “mechanism of action” which underlie a disease process or therapeutic intervention. For example, magnetic resonance spectroscopy (MRS) can be used to study metabolic processes through measurement of in vivo metabolite concentrations: it is possible to detect high-energy phosphates and hydrogen-based metabolites in brain, heart, muscle and tumour.

Vascular parameters such as blood flow and vessel permeability can also be investigated, most commonly through rapid monitoring of signal enhancement while an intravenously injected contrast agent passes through the organ of interest. Finally, one technique that has gained great popularity is the so-called “functional MRI” (fMRI) technique, where MRI signal changes in the nervous system reflect increases in local blood flow, which are interpreted as the effect of local neurological activity. fMRI has gained wide acceptance in the human neuroscience and psychology fields; however its application to animal models is still a matter of ongoing development.

Molecular Imaging: Detection of Cellular Events and Beyond

The current frontier in preclinical MRI research is “molecular imaging”, which aims to noninvasively detect events on the cellular and subcellular level. This approach typically involves attaching a payload of MRI-visible contrast agent to a cell or nanoparticle that would otherwise be undetectable under MRI. In this way, therapeutic agents such as drugs, lentiviral vectors, and stem cells can be “labeled” in order to monitor the biodistribution and pharmacokinetics of the agent following injection. Another approach is to conjugate the MRI contrast agent with a ligand which preferentially binds to specific endogenous receptors, opening up the possibility to detect the expression of enzymes or receptors that arise in specific biochemical pathways. By far, the biggest challenge with using MRI for molecular imaging is its low sensitivity; MRI contrast agent concentrations must at least be in the micromolar range, whereas radiotracer contrast agents used in positron emission tomography (PET) can be detected in the picomolar range. However, MRI does provide the advantage of acquiring images that elucidate both the “molecular” events as well as the anatomy in the same experiment with the same instrument.

Here we list some of the peer-reviewed publications generated from the facility within recent years:

The UBC MRI Research Centre was established to support the local biomedical research community with the resources and expertise necessary to implement MRI techniques in their research. The main centrepiece of our preclinical research capabilities is a 7 Tesla MRI scanner designed specifically for small experimental animals such as mice and rats. We take pride in providing a full range of research support for MR imaging and spectroscopy applications including method development, data collection and data analysis. Our approach is very much a collaborative one, with user research driving new technique development and vice versa. The costs associated with system maintenance, scanner operation and method development are recovered through an hourly rate applied during the imaging sessions. Highlights of our facility infrastructure include: