The UBC MRI Research Centre is heavily involved in MS research. Centre Director Professor Alex MacKay and his team developed an imaging technique which allows us to monitor myelination in the brain by imaging the water contained in myelin. This technique is used in a number of studies where we follow people with MS over time in hopes of understanding how lesions evolve. 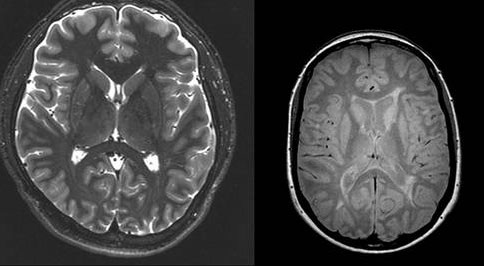 The following is a list of MS related research projects either completed, proposed or underway at the UBC MRI Research Centre:

In this study led by Dr. MacKay’s group, twenty subjects with MS were followed monthly for 6 months. The scans collected included sequences for the measurement of water content and myelin water fraction, water diffusion, brain metabolite concentrations (spectroscopy) and iron assessment with SWI. Data collected will give insight into the time course of demyelination and remyelination in lesions. Also, the time course for other MS pathology can be explored such as damage to the axons and recovery from inflammation.

SWI is a powerful technique which can visualize small venous vessels in the human brain without the need of a contrast agent. Dr. Rauscher and Dr. Tony Traboulsee are collaborating to investigate the relationship between MS lesions and veins with SWI. This research will result in a non-invasive MRI technique that allows for a more accurate diagnosis of MS and other white matter diseases. The results of this research may decrease the risk of mis-diagnosis and its associated costs including delayed treatment, additional investigations, and psychological stress.

MR spectroscopy can be used to examine chemicals in the brain. In this study, Dr. David Li and collaborators were particularly focused on one chemical related to axons (N-acetyl-aspartate, NAA). The change in NAA over time was examined in a group of people with MS treated with Dirucotide versus an untreated group to see whether the drug had a protective effect on the neurons.

Advanced MR Assessment of Alemtuzumab Versus Interferon Beta 1a (Rebif)

This is a multi-site study led by UBC and Dr. MacKay’s research team which is looking at changes in water content, myelin water content, water diffusion (related to the structure of tissue) and brain chemicals over two years. The goal is to determine whether alemtuzumab is better at treating MS than the more traditional interferon beta 1a (Rebif). This clinical trial involves a collaboration with other MRI sites in Vermont, Nashville, Dallas, Chicago and Ann Arbor.

Often one of the MRI outcome measures in MS clinical trials is changes in brain size over the course of the trial. In this study, the goal of Drs. Li and Traboulsee was to determine whether fasting and drinking large quantities of water would change the water content and myelin water fraction of the brain in healthy volunteers. The measurement of water content and myelin water was done with a novel technique pioneered by Dr. MacKay’s group which has the ability to look at all the water in the brain. No changes in water content or myelin water were found in this study which means that other studies looking at changes in brain water content do not have to take into account what the volunteer was eating or drinking at scan time.

This study is designed to look for potential remyelination in new lesions of MS subjects who have just started on the drug glatiramer acetate (Copaxone). Dr. MacKay’s group plans to detect remyelination by measuring increases in myelin water fraction (a marker for myelin). Functional recovery will be measured by timing responses to different stimuli using evoked potentials. The hypothesis is that as myelin water fraction recovers in lesions, the time for nerve signals to travel within the body will go down (i.e. improved motor function).

Previous studies have shown that certain MS lesions have a unique MR signal (known as a “long T2 signal”) that is only visualized when data is collected for long enough times. This signal may be related to specific MS pathology such as inflammation and gliosis (scarring). The goal of this study is to measure the long T2 signal in MS subjects over time for one year to see whether the time course of the long T2 signal can be related to pathology. Specifically Dr. MacKay and his team are interested in whether we can separate lesions which only show inflammation (and therefore may recover) from those which are more damaged. This will also be related to changes in brain perfusion and diffusion measurements which are also more specific to pathology.

MS lesions can be easily seen with MRI. However, a number of things can make lesions look bright (extra water, myelin loss, axon damage etc.) and standard imaging is not able to tell these processes apart. In this collaboration with researchers from Calgary, Drs. Li and Traboulsee are interested in texture analysis of lesions which may be able to give more specific pathological information; when regular myelin structure is disrupted coarse texture increases because tissue becomes disorganized. Early results suggest that texture analysis may identify abnormalities before they become visible on standard imaging and may detect mild ongoing tissue injury in older lesions.

Disease modifying therapies for MS can cause a decrease in brain size by reducing swelling (i.e. increased water content) caused by inflammation. This pseudo-atrophy prevents us from detecting if a medication also prevents brain damage (i.e. loss of brain cells – atrophy). Dr. Traboulsee’s research uses advanced imaging techniques available at UBC to monitor the effect of MS therapies on the water content of the brain that may be responsible for pseudo-atrophy.